​﻿﻿﻿Romance in a Kilt - Romantic stories of Scotland with feisty heroines and strong heroes.

Cathy MacRae is a best-selling, award-winning author of Scottish historical romance. She enjoys writing stories of happy-ever-afters featuring strong heroes and feisty heroines against the stirring backdrop of the Scottish Highlands. She is the author of the Highlander's Bride series, and co-author (with DD MacRae) of the popular Hardy Heroines series. Partnering with LL Muir and other historical authors, she writes in the Ghosts of Culloden Moor series.
​                                                          * * *
"....Ms. Macrae hooks her readers with edge of the seat suspense and excitement through to her characters' final happily ever after. Good job, Cathy. And thanks for many hours of reading pleasure!" Socratesmom
​"THE HIGHLANDER'S CRUSADER BRIDE ... a wonderful mix of history, culture and slow burn romance. Definitely a page-turner!" - Celtic Dragon Book Reviews
THE HIGHLANDER'S VIKING BRIDE - "...definitely an adventure to read!...this is a delightful read for those looking for an exciting, breathless story--one that ... glories in the strength of the human spirit. I look forward to more from these authors!
Reviewed by Michaelene, Alpha Book Club
Follow me on BookBub;   Amazon;  Goodreads;  Twitter;  Facebook;  Pinterest:  Instagram 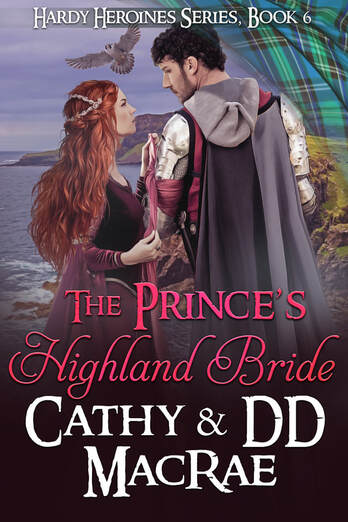 ​
Book #6 in the Hardy Heroines series is the story of Phillipe of Antioch who you met briefly in The Highlander's Crusader Bride.

Research first told us he'd met his end in an inglorious manner, but we took a deeper look and discovered something different. We took the tale a bit farther and re-imagined what might have happened...

Phillipe de Poitiers, a prince of Antioch, has been wrongly accused of treason. To save himself, he abandons his crown, leaving behind his family, friends—and a body sworn to be his by the Bishop, himself.

Drawn to Scotland by memories of a woman who once possessed his heart, Phillipe sells his sword to pay for his travels and accepts the task of guarding the daughter of Laird MacLaren.

When Maggie MacLaren’s abusive marriage fails, she want nothing more than to retire to her childhood home on the banks of Loch Lomond. Trouble follows her, putting her clan in danger, so she travels to the Isle of Hola, placing her safety in the hands of a mysterious mercenary with a haunted smile and a kind heart.

As Maggie and Phillipe struggle with their pasts, love blooms. But when a pirate’s treasure offers a seductive lure, will it free them—or prove the downfall of all they hold dear? 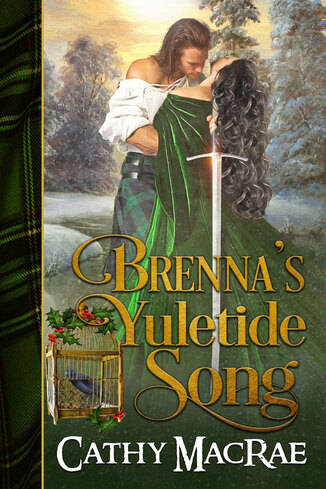 Two new novellas just in time for the holidays!

Brenna's Yuletide Song will be featured in an anthology entitled, Twelve Days   of Christmas in the Arms of a Highlander.

Cover reveal for the anthology coming soon.
(Brenna's Yuletide Song will release as a stand-alone in February 2021)

Blurb:
She’s the pampered daughter of a wealthy cloth merchant. He’s a Highlander   with no intention of taking a wife. Their marriage would unite the shipping   businesses of two great merchants. What could possibly go wrong?

With Cristemasse only a few days away, Brenna le Naper has her thoughts on   her newest gown. Her father, however, is more interested in seeing her wed.   But marriage to a Highland barbarian is not the life she envisioned for herself.   Far from it.

Uilleam MacLaren cannot believe his father has signed a betrothal document in his name—much less to one of the Four Songbirds of Corbie’s Burn! Known less kindly as the Four Corbies for their chatter-box ways, the lasses may be beautiful beyond measure and with voices to make angels weep, but who wants a chantie-beak for a wife?

Will the beautiful songbird in her gilded cage reject marriage to the handsome Highland barbarian? Will the laird’s son refuse to wed the lovely chatterbox? Or, will a Yuletide miracle allow them to see each other for who they really are and give them a chance at true love?

Brenna’s Yuletide Song is the rollicking romance of two people who appear to have nothing in common. If you like stories about hunky Highlanders, impetuous heroines, and with more laugh-out-loud moments than you can keep track of, Brenna’s Yuletide Song will keep your nose glued to your kindle long past bedtime.

Brenna’s Yuletide Song contains a swoon-worthy Highlander, a flighty, stubborn heroine, a temperamental French chef, a wee puppy who causes a host of problems, Medieval revelry, an innkeeper’s wife with false teeth, and a host of perils and comedy that will make you snort your coffee. 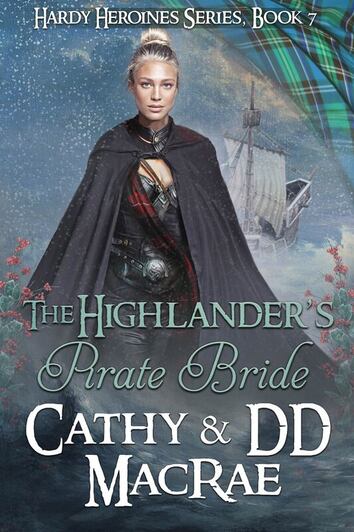 Novella #2 is the seventh installment in the Hardy Heroines series and   will  be featured in a holiday boxed set of rogues and outlaws, entitled,   Merry Mayhem.
The Highlander's Pirate Bride will release as a stand-alone in February,   2021.

blurb:
​ As the pirate The Black MacNeill, Rona MacNeill has stolen more than one   English ship to keep her clan from starving. With Yule only days away, will   the theft of the wrong ship land her in a hangman’s noose? Or the arms of   a  Highlander?

Rona MacNeill, as the pirate, The Black MacNeill, has done everything she   can to help her small, impoverished clan—except marry for money. Her   luck seems to lie in stealing ships, not attracting suitors. Only days before   Yule, she seeks one last ship with stores to keep her people fed over the   long, harsh winter. Too bad her luck has run out.

Pedr MacLean is happy to be the younger (by three minutes) son of Baron   MacLean. His days are filled with running the family’s shipping business   and sailing the world. His heart belongs to the sea—or so he thinks, until   one of his ships is stolen, and the woman responsible turns his world upside down.

Drawn to Rona’s strength and love of the sea, Pedr will agree to her father’s demand—information on the whereabouts of his ship in exchange for his daughter’s hand in marriage. Will Rona find herself caught between a marriage of convenience and a hangman’s noose? Or will she discover something far more compelling?

The Highlander’s Pirate Bride is the swash-buckling seventh addition to the Hardy Heroines series. If you like pirates, rags-to-riches, and swoon-worthy Highlanders, you’ll love Cathy & DD MacRae’s newest high-seas romance. 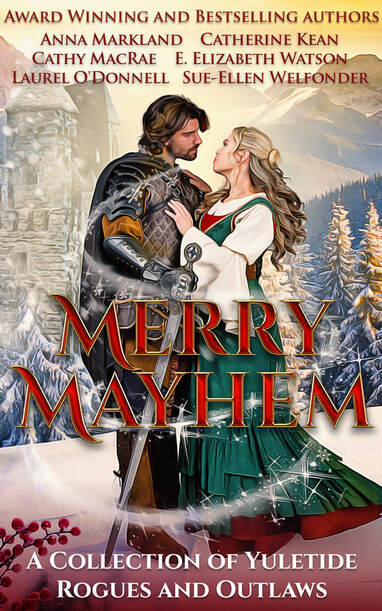 Let six award-winning and bestselling authors sweep you away to Medieval Scotland and England for the holidays, with six never-before published tales of Yuletide rogues who steal their ladies' hearts. Whether tales of midwinter legends,daring escapes, and second chance love, or pirates, bets, and outwitting villains, a merry sort of mayhem abounds! O'Donnell, Kean, Watson, Markland, Welfonder, and MacRae deliver heartwarming novellas sure to tug your heartstrings and warm your coldest midwinter days. 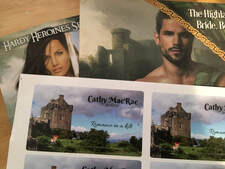 The Hardy Heroines series and the Highlander's Bride series are now available from Amazon in print and ebook! If you've purchased any of my books in print and would like a signed book plate to place inside the cover, email me at cathymacrae@cathymacraeauthor.com and let me know which books you'd like plates for. If it's a Hardy Heroines book, I'll have DD sign also!
Click on any of the covers below for their Amazon links.
The Hardy Heroines series (with DD MacRae)
Unconventional heroines who require extraordinary heroes. 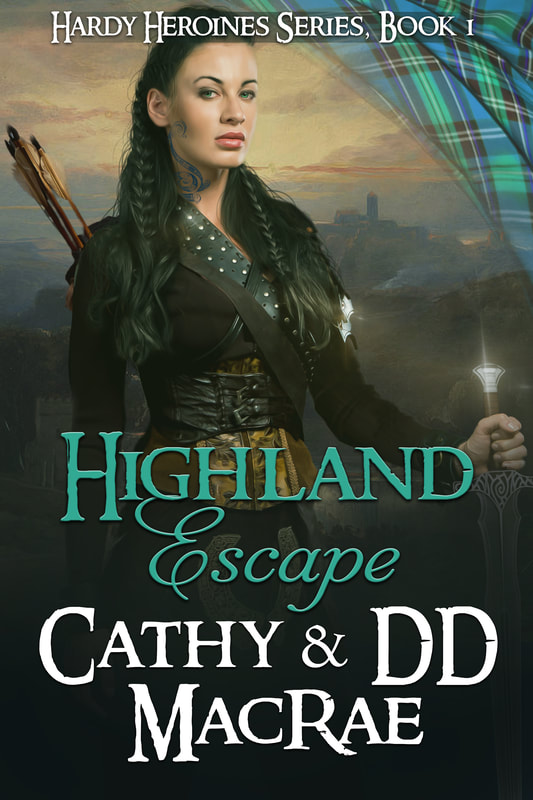 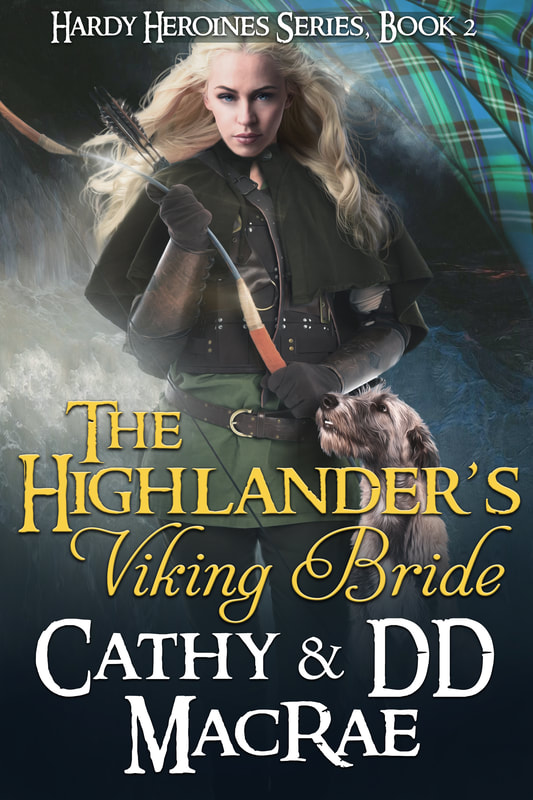 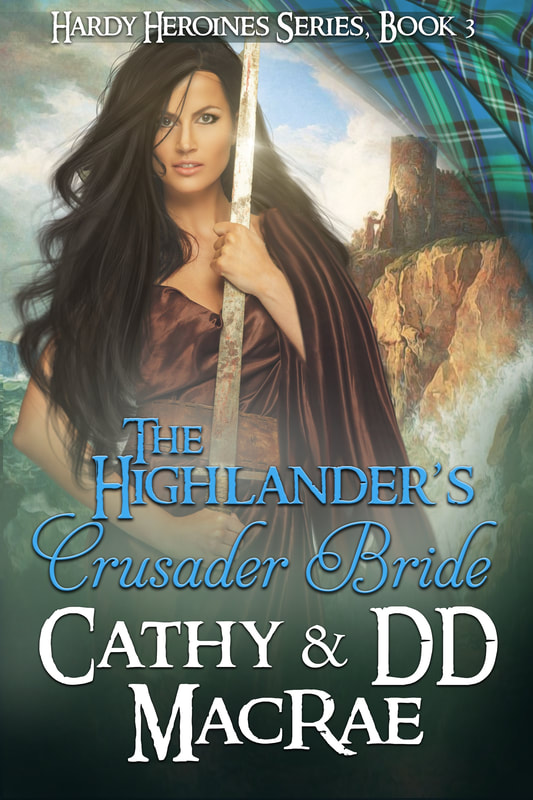 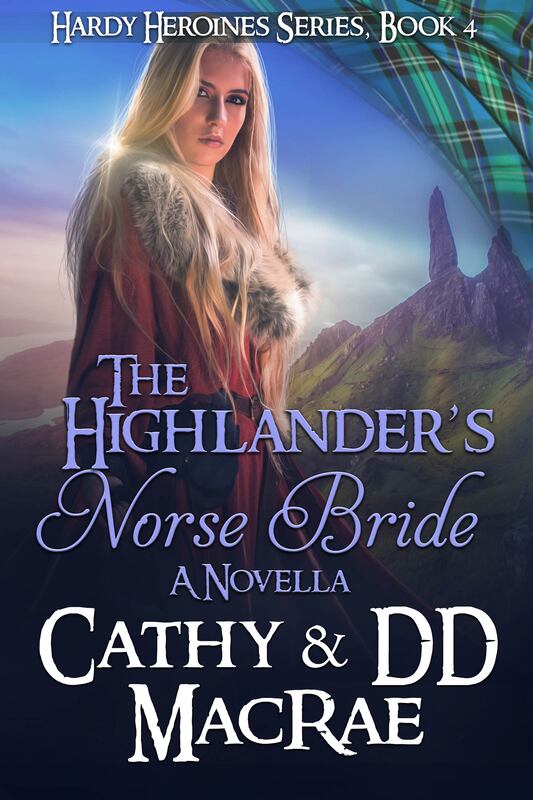 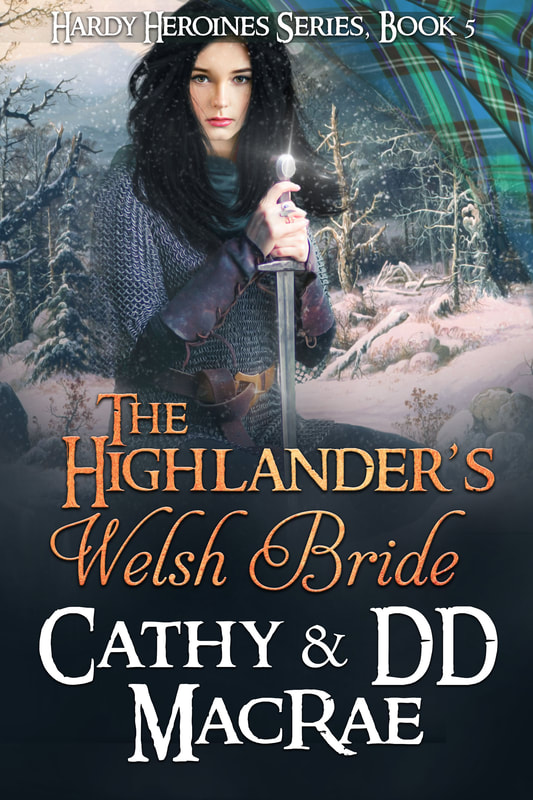 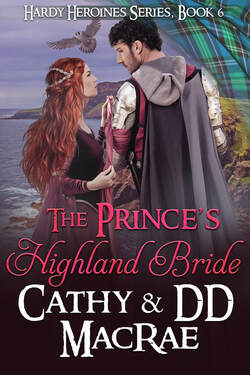 The Highlander's Bride Series:
A continuing saga (though each book is a complete a stand-alone tale) of men and women who go the extra mile to discover their happy-ever-afters. 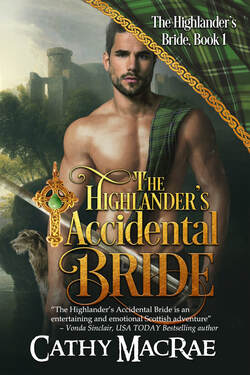 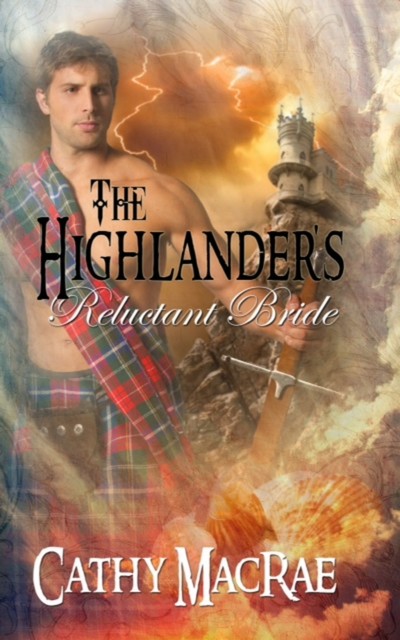 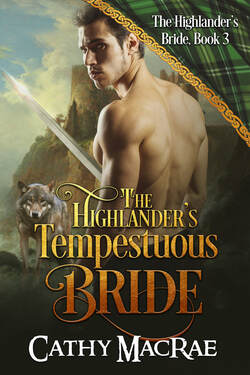 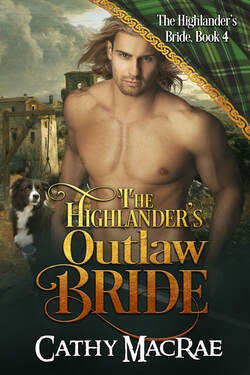 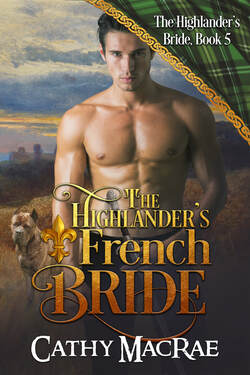 The Highlander's French Bride; Book 5
The Ghosts of Culloden Series with LL Muir and other authors:
'Tis more than pride holding these ghosts to Culloden's Moor, and 'twill take something very compelling to set each of them free. 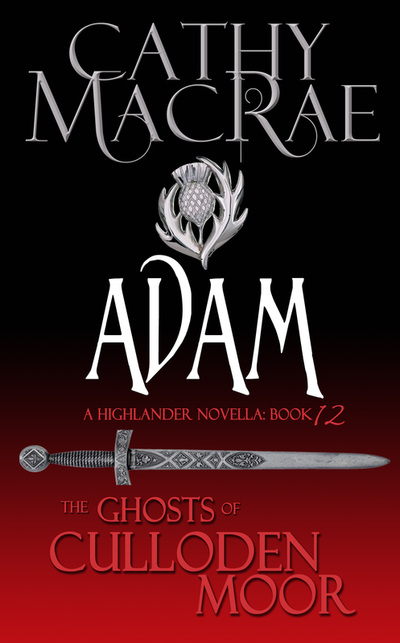 Adam; A Highlander Romance, The Ghosts of Culloden Moor series 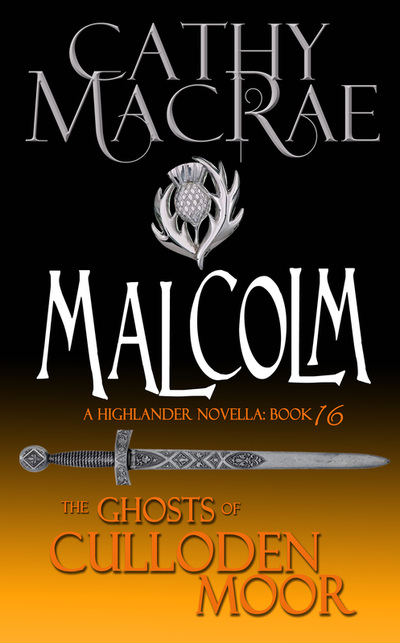 Malcolm; a Highlander Romance, The Ghosts of Culloden Moor series 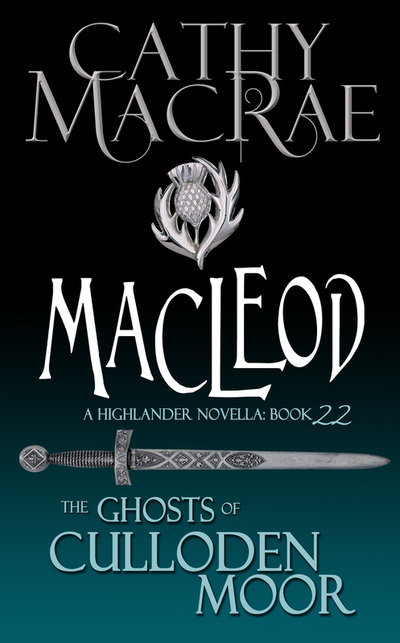 MacLeod; A Highlander Romance, The Ghosts of Culloden Moor series 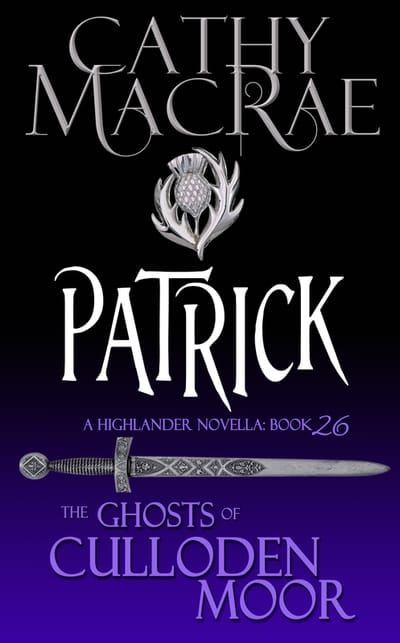 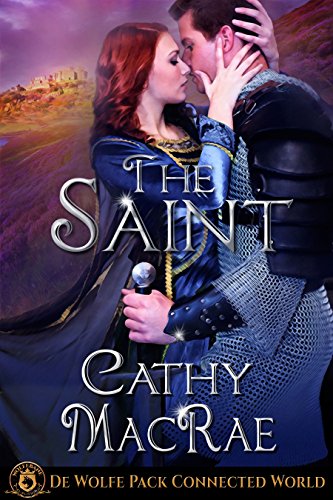 The Saint, book #1 in the De Wolfe Pack Combined Worlds 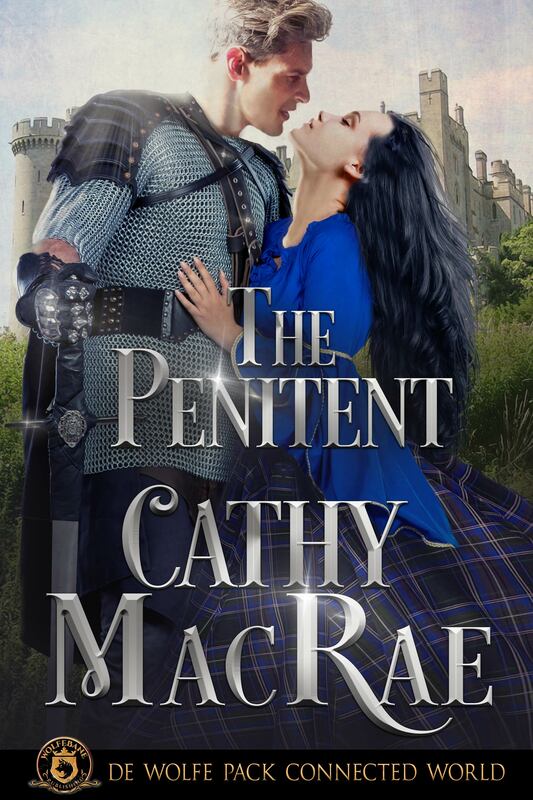 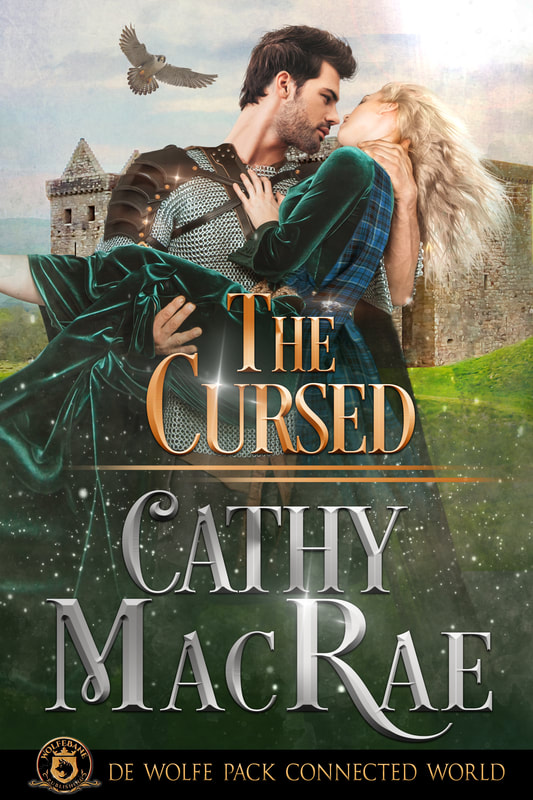 Pre-order available soon! Book releases Dec. 28!
Contemporary Romance:
The Italian Billionaire's Runaway Bride- Carmella finds her marriage falling apart- before the wedding is over.
Click on any of the above covers for Amazon links.
​
* * * * * * * *

This website uses marketing and tracking technologies. Opting out of this will opt you out of all cookies, except for those needed to run the website. Note that some products may not work as well without tracking cookies.