ABOUT THE BOOKS
2019 update: A third book in my De Wolfe Pack Connected World is wrapping up and will release in late November. A fifth book in the Ghosts of Culloden Moor series is on the table, with possible release later this year. Book six in the Hardy Heroines series is next on the list as DD and I set up the scene for The Prince's Highland Bride. 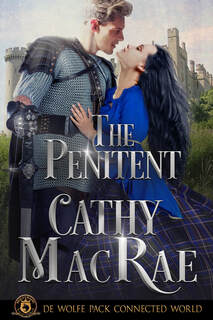 The Saint's closest friend, Sir Gilbert de Bretteby, has reached a crossroads. No longer the   commander of The Saint's knights, he has been given North Hall at Friar's Hill, a pivotal   holding close to the border between Scotland and England. It is time for him to marry and   start a family, but can he pledge himself when he left his heart with a Scottish lass years ago?

Forced to flee their home, Iseabal Maxwell, her two trusted servants, and her wee son travel   south in an   effort to elude pursuit. Reaching Friar's Hill, Iseabal wishes to begin life again   free from  family complications. Her hopes are dashed when she is captured by none other   than the man she saved from certain death years before. Will memories of their brief time   together heal her heart?

Sir Gilbert sets out to woo the one woman he has ever loved. He won her heart once, will he be able to a second time? 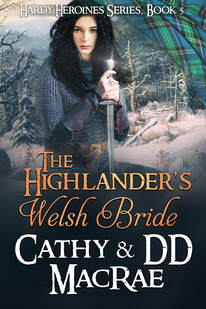 Book 5 in the Hardy Heroines series

From the sweeping mountains of Wales where Prince Llywelyn made his last stand against the   English, to the   treacherous Isles of Scotland where Vikings and pirates rule the waters,   comes a   tale of betrayal and loss,   deceit and passion. An epic tale of honor and the   redeeming power of   love.

It was over. Prince Llywelyn was dead, his soldiers fleeing before King Edward’s army. Carys, a   cousin   to the prince, herself a princess of Wales, had picked up arms alongside her husband   more than a year ago in   the fight for Wales's independence. Now homeless, her husband   buried   beneath the good Welsh soil, she   seeks shelter in the north, far from the reach of Longshanks’s   men.

Birk MacLean has been ordered to take a bride and produce an heir. He grows weary of the   lasses paraded before him, women of delicate nature and selfish motives. He desires a wife strong enough to   help lead one of the most powerful clans in Western Scotland.

One like the Welsh woman sitting in his dungeon, arrested for poaching MacLean deer.

Can Birk convince Carys marriage to him is preferable to a hangman’s noose? And will the heard-headed Scot be worthy of a Princess of Wales?
​
Amazon: https://www.amzn.com/dp/B07KNYTMPK 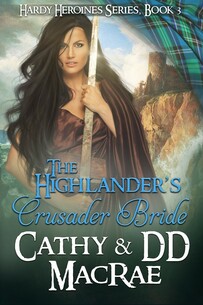 Book 3 in the Hardy Heroines series
​
Born in the Holy Land only a few years after the Third Crusade, half-Armenian, half-Scots Arbela MacLean is a true daughter of the desert, beautiful and untamed. Trained to be a warrior to avoid her gentle mother’s fate, Arbela has honed her skills with Turkish bow and arrow, sword and throwing darts—and dreads the day her father choses a man for her to marry.

After more than thirty years in the Holy Land, Donal MacLean, Baron of Batroun, is recalled to Scotland, the last son available to take up leadership of clan MacLean. He brings with him knights, treasure, trade—and a daughter of marriageable age.

Caelen MacKern, known as the Bull of the Highlands, is cynical about women. His first marriage formed an alliance, and he did not grieve when his spoiled, immature bride passed away. He has agreed to marry again—against his better judgement—for the men, means and coin to recover from a devastating pestilence that all but wiped out his clan.
​​
More than a little resentful at finding himself forced to remarry, Caelen’s proposal to Donal MacLean’s headstrong daughter nevertheless piques her interest. Each will receive what they want most from life—the ability to live their lives as they please without interference from a meddling spouse. But their marriage of indifference will soon change to one of passion that neither Arbela nor Caelen could have predicted.
Amazon: https://www.amzn.com/dp/B0762TL89Z 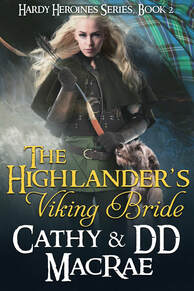 Book 2 in the Hardy Heroines series
​
Born into wealth and privilege, Katja balks at being another mindless  cog in her father's self-   serving machinations. To help her protect herself  when her father's scorn only breeds contempt   for Katja and her status  as an earl's daughter, her brothers teach her to draw a bow and throw a  knife  with accuracy-- and to kill  when necessary.

Calder notes his wife, the morning after their wedding, "near  bristled  with blades. He counted   the  two dirks in her belt, three  in her boots,  and one she slid under the plait at the back of her  neck. It would have  remained hidden had he not seen her place it  there.
Based on the way the cloth bunched on her left arm, he  suspected a seventh lay tucked in a sheath attached to her forearm. Include the sword strapped to the back of her horse, and the curved bow in its leather case, and she was better armed than he and his men." 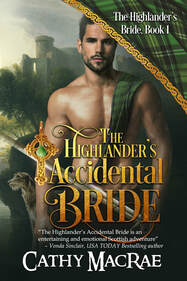 Book #1 in the Highlander's Bride series

The Highlander's Bride series has new covers!
As the rights for publishing reverted to me from Soul Mate Publishing (quite a pleasure to work with!) I have done a bit of editing, re-formatted the work, and added a wee epilogue to the end. (at the request of a few readers) I think it foretells the next story (The Highlander's Reluctant Bride) rather well, and briefly ties up a few loose ends.

For those of you who purchased the original version and requested an epilogue, the following is for you:

Mary patted her swollen belly, a smile on her lips as she felt the bairn kick. Eaden sent her an anxious look.
“Do not worry about me, love,” she told him. “There are weeks left before you get to meet your son.”
“Or daughter,” he corrected automatically. “Are ye certain? I can send someone else to Ranald’s wedding.”
“You’ve sent Finlay already,” she reminded him. “And the king has requested your help. I only wish I could travel with you. The young woman he is to wed must be heart-broken over her father’s passing.”
“Aye. And with her brother missing on the battlefields of France and presumed dead, this is a difficult time to consider a wedding. But the succession must be sealed and the lands and people protected.”
“At least she has a good man to soon call husband.”
Eaden gave a short laugh. “She will remember Ranald from the times he and I visited Scaurness as lads. We dinnae always treat her as well as we should. She tagged along no matter what we were about, and I am afraid she likely has poor memories of our pranks.”
Mary rolled her eyes. “Our son will treat the fairer sex better.”
“Our daughter will know how to stand up for herself,” Eaden countered, a twinkle in his eye, happy to tease his wife. His look, however, turned pensive as he considered the magnitude of the responsibilities Ranald now faced as laird of the Macrory clan.
“What is it, Eaden?” Mary asked, laying slender fingers on his arm. He covered them reassuringly with his hand, pleased at the easy way she touched him. “What do you fear?”
He raised his eyebrows. “Other than my brother is about to wed a young woman who may or may not wish to be married to him?”
Mary tilted her head in sympathy.
Eaden lifted the fingers on his hand one by one. “He has taken command of a clan he has faint blood ties to, amid people divided between his rule and that of the laird’s absent son. And the clan is a sea-faring one.”
“Why is that a problem?”
“My brother cannae tolerate boats. He gets seasick just looking at the waves.”
Mary smiled. “Give him my love, and let him know of his soon-to-be-nephew. And tell him I would love to meet his bride one day.”
“Or niece,” Eaden replied as he gathered his wife in his arms, thrilling to the firmness of her rounded belly against his. Tilting her chin up, he kissed her, lingering until he could push the time for his departure no longer. “Ye should have no difficulties from Bellecourt now that Miriam and her husband are in control. The feud is at an end, no matter Barde sits harmless as an auld man in his tower now. Take care, Mairi, love. I will return to ye as soon as I am able.”
“I love you, Eaden. I will wait until you return to produce your heir.” Her merry look met his as he squeezed her hand one last time. Mounted on Duff’s back, he leaned over and placed a final kiss on Mary’s lips, pointing a finger at Sorcha who whined to be at his side.
“Protect her,” he commanded. He wheeled Duff about, spurring him to a gallop through the castle gates. 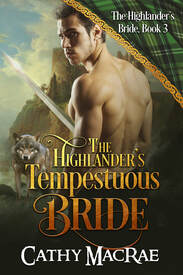 Book #3 in the Highlander's Bride series

At seventeen, Gilda Macrory is certain her father, Laird Macrory, is about to choose a husband for her. So, why did she lose her heart to the son of their sworn enemy?

Ryan Macraig, just returned home from ten years fostering, has fallen for a fiery-haired lass he met on the beach along the firth. Though he knows she must be a hated Macrory, he cannot deny his desire to see her again. And again. 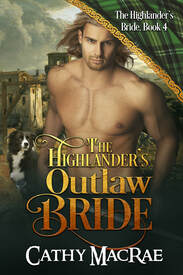 Book #4 in the Highlander's Bride series

This is the story of Connor MacLaurey and Brianna Douglas. The beginning of Conn's story can be found in The Highlander's Tempestuous Bride, where he loses his heart to his best friend's wife.
After reivers lay waste to the Douglas clan's cattle, Brianna is forced to take matters into her own hands, landing herself and 6 loyal Douglas soldiers before the sheriff--and the gallows.
Forced into a marriage neither Brianna nor Conn want, it will take soul-searching sacrifice to give them their chance at happiness. 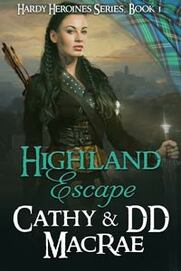 Book 1 in the Hardy Heroines series

Meet Anna Braxton, a young woman trained as a warrior-- a throwback to a time when Pictish women fought alongside their men to repel the Romans.

Falling in love will not be easy for Anna when men have only populated two categories in her life so far: allies who are kin or clansmen she can rely on not to betray her, or enemies who are to be watched and not trusted. She has no room in her life for a man who could injure or betray while posing as the strongest ally.

Until she meets Duncan MacGregor who is intrigued by more than her skill with a bow and sword. He wants her as his wife, but can he accept her conditions? 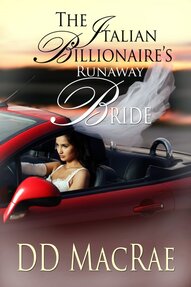 Fast-paced romance set against the dazzling blue waters of the Mediterranean and the glittering halls of the rich and famous, Italian Billionaire Enzo De Rossi's Runaway Bride refuses to allow convention to ruin her life. Carmella dreams of a happy, stable marriage--and Enzo De Rossi is the last man who can give her what she wants. Or is he?